Left-Handers are all Right


Left handers get a chance to celebrate this year on August 13th, which is 2015’s National Left Hander’s Day.


Lefties are said to make up roughly 10% of the population. A popular nickname for them is Southpaw. Genes and environment seem to be the contributing factors for lefties.


Historically, left handed people have been discriminated against with negative connotations of being wicked or unlucky. In parts of Africa, Europe and the Far East, it’s offensive to use your left hand because it is considered unclean.


For the most part, left handers are left out in left field when it comes to tools, desks, scissors, etc.., with most of them being designed with right handers in mind with little consideration for the left hander.


However, when the Bible refers to left handed people, it speaks of left-handedness as an advantage, not a weakness. One of Israel’s judges, Ehud was a mighty warrior and left handed. Judges 20:16 mentions 700 left handed warriors who could sling a stone at a hair and not miss.


Some famous left handers are Bill Clinton, Barack Obama, Tiny Tim, Lou Rawls, Jerry Seinfeld, Oprah Winfrey and Bruce Willis. Some advantages to being left handed are a high IQ, they adjust easily to seeing underwater, they multi-task better, have better memories and tend to be artistic.


In this day and age, being left handed is not quite as bad as it used to be considered, but it is still not without its challenges, so be sure to extend a Southpaw to your leftie friends this August 13th. 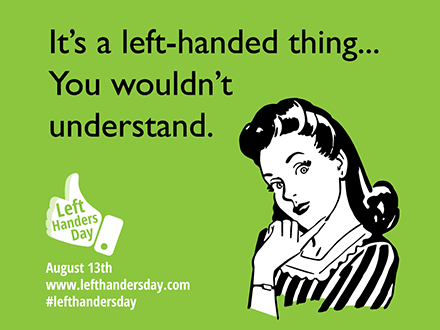 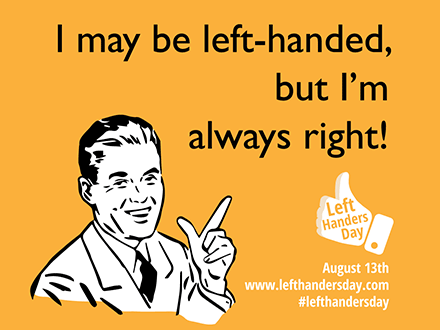